Will ethanol hurt my car’s engine?

No. And by using ethanol blends like E10, motorists can reduce harmful emissions. 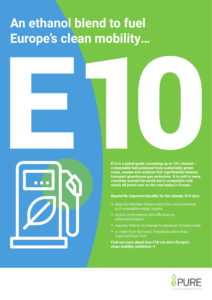 E10 is a petrol grade containing up to 10% ethanol by volume. Since 2016, E10 has been the European test fuel for type-approval fuel consumption and emissions testing. It is currently available in 13 EU countries: Belgium, Bulgaria, Denmark, Estonia, Finland, France, Germany, Hungary, Lithuania, Luxembourg, the Netherlands, Romania and Slovakia. To find out more about E10, click here.

Blending renewable ethanol into petrol reduces greenhouse gas emissions. The more ethanol blended in, the better the results. This will boost Europe’s ability to meet its targets for transport decarbonisation.

Is my vehicule compatible with E10?

Nearly all cars and motorcycles built after the year 2000 are compatible with E10. There is no need to adapt vehicles to obtain instant benefits with such blends. In fact, all new cars are not only compatible with E10 but they are optimized to run on it. In the main fuel ethanol consuming markets, vehicle compatibility issues have been overcome. In the U.S., E10 has been approved for use in any conventional gasoline powered vehicle. In Europe, a list of cars compatible with E10 as of August 2018 can be found on the European Automobile Manufacturers Association website. A list of compatible motorcycles can be found here.

In fact, ethanol is more energy-efficient than petrol. It cools down engines twice as much as petrol when vaporised and provides more octane, which helps improve efficiency. Specifically, ethanol’s octane rating is 107, higher than that of regular petrol (95) and premium petrol (98). Additionally, it improves the resistance of the fuel to the harmful premature combustion, reduces emissions and fuel consumption in optimised engines.

How does ethanol use affect emissions?